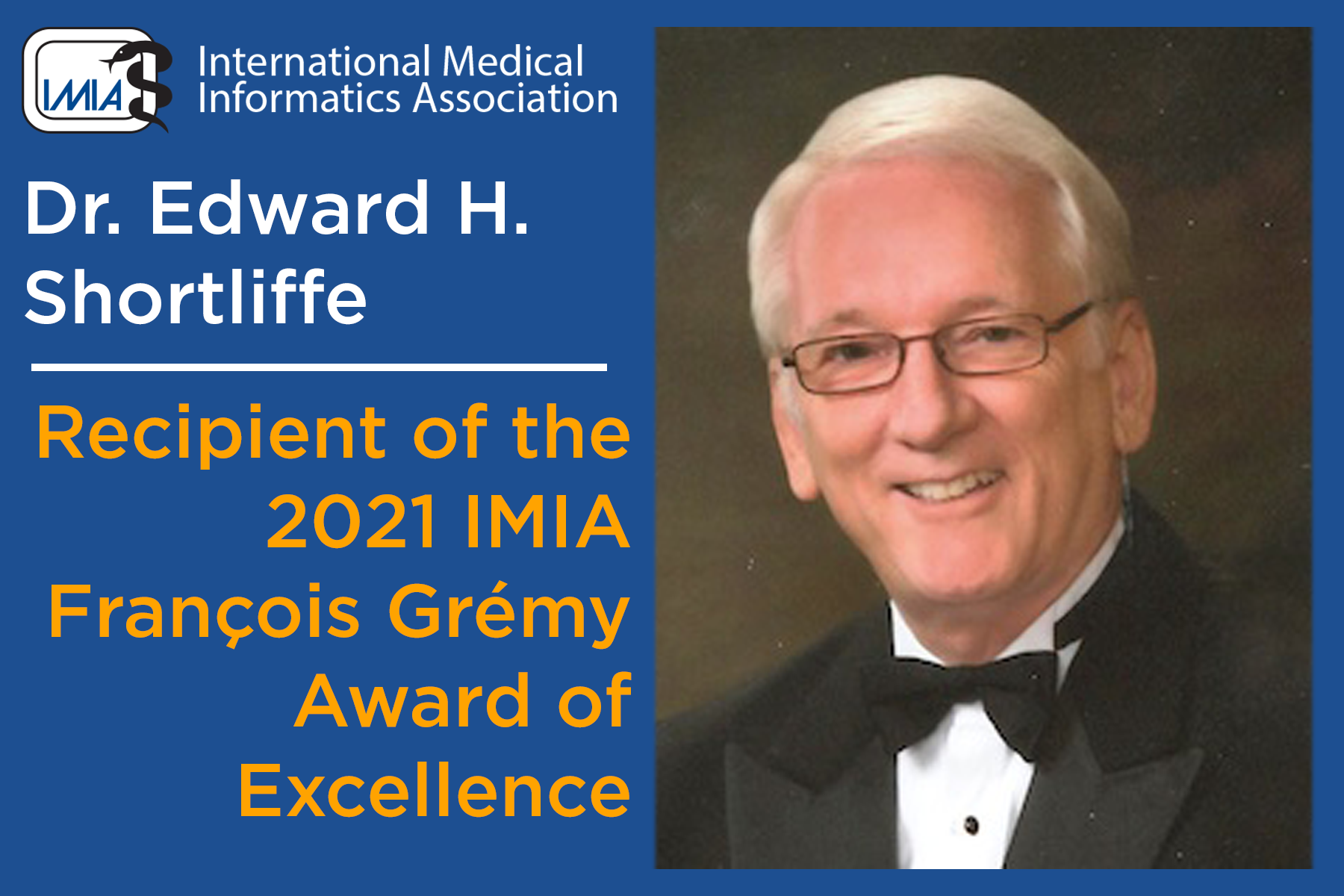 The 2021 IMIA François Grémy Award of Excellence recognizes the long-lasting contributions Dr. Shortliffe has made through his lifetime dedication to the advancement of biomedical informatics through both research and education and his important contributions through his scientific and policy achievements, both nationally and internationally.

Dr. Sabine Koch, the President of IMIA, will present the François Grémy Award of Excellence on Saturday, October 2nd at the opening online session of MedInfo 2021. “It is an honor for IMIA to recognize Ted Shortliffe as the 2021 recipient of IMIA’s François Grémy award for his lasting contributions to our field,”said Dr. Koch. “Dr. Shortliffe is a real pioneer and leader in medical informatics and education who influenced numerous scientists, teachers and students.”

A pioneer in the development of applications of artificial intelligence in medicine, including the first expert system (MYCIN), he has also spearheaded the formation and evolution of graduate degree programs in biomedical informatics at Stanford, Columbia, and Arizona State University.

Both a PhD informatics scientist and a physician who has practiced internal medicine, Dr. Shortliffe is an elected member of the National Academy of Medicine. He has also been elected to fellowship in the American College of Medical Informatics (ACMI) the Association for the Advancement of Artificial Intelligence, and the International Academy for Health Sciences Informatics. A Master of the American College of Physicians, he received the Association of Computing Machinery’s Grace Murray Hopper Award in 1976 and ACMI’s Morris F. Collen Award in 2006. Editor Emeritus of the Journal of Biomedical Informatics and editor of a well-known textbook on Biomedical Informatics (now in its fifth edition), Dr. Shortliffe has authored over 350 articles and books in the fields of biomedical informatics and artificial intelligence.

“François Grémy was among the first informatics luminaries whom I encountered when I attended the first MedInfo meeting in Stockholm and presented a paper in 1974. I had received a student travel grant that allowed me to attend even though I was still working on my doctoral degrees at the time. Dr. Grémy was very impressive, and I could never have imagined that, almost 50 years later, I would be receiving this wonderful award in his name.” said Dr. Shortliffe in the announcement press release. “I remember Grémy as a kind and brilliant man and it was a pleasure to get to know him, and to share an occasional meal with him, at international meetings over the years. I am grateful to IMIA for allowing my name to be linked to his in this remarkable way, which brings me both honor and pleasure.”

The recipient of this Medical Informatics Award of Excellence is an individual whose personal commitment and dedication to medical informatics has made a lasting contribution to medicine and healthcare through her or his achievements in research, education, development, or application in the field of medical informatics.
For more information about IMIA’s Award visit: imia-medinfo.org/wp/imia-award-of-excellence/

About IMIA
IMIA is the world body for health and biomedical informatics committed to promoting best practice in the use of information and communication technologies within Medical, Biomedical, and Health Informatics. As an ‘association of associations’, IMIA provides leadership and expertise to the multidisciplinary, health focused community and to policy makers to enable the transformation of healthcare in accord with the world-wide vision of improving the health of the world population.

About MedInfo
MedInfo is IMIA’s internationally acclaimed “World Congress on Medical and Health Informatics”. The Congress is held every two years and provides both a high-quality scientific exchange of current research and thinking in health and biomedical informatics and an opportunity for formal meetings and informal networking of IMIA’s members. MedInfo 2021 will be held as an online event October 2 – 4, 2021. MedInfo 2023 will be held in Sydney Australia July 7 – 12, 2023, hosted by the Australasian Institute of Digital Health (AIDH).