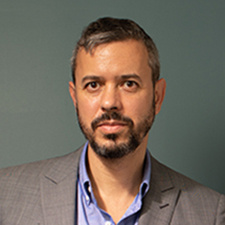 Professor of Systems Biology and of Biomedical Informatics; Director of Mathematical Genomics

Raul Rabadan received his PhD in Theoretical Physics in 2001 and went on to conduct research in that field for five years at the European Laboratory for Particle Physics (CERN) in Switzerland and at the Institute for Advanced Study (IAS) at Princeton. In 2006 he decided to join the Systems Biology program at IAS, as a Martin A. and Helen Chooljian Member. He moved to Columbia University as an Assistant Professor in 2008, with a joint appointment in the Department of Systems Biology and the Department of Biomedical Informatics. At Columbia University, Rabadan has put together a highly interdisciplinary lab with researchers from the fields of mathematics, physics, computer science, engineering, and medicine, with the common goal of solving pressing biomedical problems through quantitative computational models. The amount of high-throughput data in biological and clinical systems — from next-generation sequencing experiments to electronic health records — is increasing dramatically, allowing for the development of a quantitative understanding of these complex systems. Rabadan’s lab consists of an interdisciplinary team developing mathematical and computational tools to extract useful biological information from large data sets. Rabadan’s work focuses on three distinct topics: 1) Infectious diseases. Evolution is a dynamic process that shapes genomes. Our team at Columbia is developing algorithms and software to analyze genomic data with a view to understanding the molecular biology, population genetics, phylogeny, and epidemiology of viruses. 2) Evolution of cancer genomes. Next-generation sequencing technologies provide an extraordinary opportunity to identify somatic mutations that contribute to the development of tumors. We are establishing methods to identify cancer-driving mutations in high-throughput sequencing data sets. 3) Electronic health records. Clinical databases provide a rich and complex source of raw data. We are using the power of statistics and computers to tease out important clinical patterns in these diverse, important data sets. Rabadan’s scientific work has led to more than 90 peer-reviewed scientific publications, many in the highest impact factor journals in their fields. These high-impact publications include New England Journal of Medicine, Nature, Science, Nature Genetics, Nature Medicine, Cell, Cancer Cell, Journal of Experimental Medicine, Proceedings of Natural Academy of Sciences, and PLoS Pathogens, among others. Due to their significant implications for human health, several of Rabadan’s results have been featured by the international press, including CNN, New York Times, Wall Street Journal, Associated Press, Reuters International, and The Economist. His work has led to novel therapies that are being tested in several clinical trials with extremely promising results.