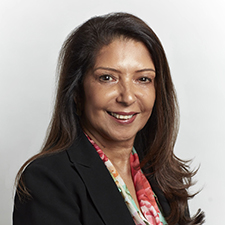 Vimla L. Patel is a Senior Research Scientist and Director of the Center for Cognitive Studies in Medicine and Public Health at the New York Academy of Medicine. She is also an adjunct Professor of Biomedical Informatics at Columbia University and of Health Policy and Research, Weill Cornell College of Medicine.

An education and cognitive psychology Ph.D. graduate of McGill University in Montreal, she was a Professor of Medicine and the director of McGill’s Cognitive Science Center. Her early research focused on scientific foundations for medical education, focusing on medical decision-making and expert reasoning. She subsequently served as Professor of Biomedical Informatics at Columbia (2000-2007), Arizona State University (2007-2009), and the University of Texas Health Sciences Center in Houston (2009-2011).

An associate editor of the Journal of Biomedical Informatics and on the editorial board of Intelligence-Based Medicine, she is an editor of the Springer book series on Cognitive Informatics in Biomedicine in Healthcare. Her current research deals with the impact of technology on human cognition for safer and effective clinical practice, as well as on global mental health. She has over 300 scholarly publications spanning books and journals in biomedical informatics, education, clinical medicine, and cognitive science.