There is a paucity of real-world clinical data that evaluates adverse drug effects in women, among other underserved populations, due to a long history of trials done on relatively homogenous patient populations (healthy white males).

Without heterogeneous data availability, biased results leave women in the dangerous position of not having accurate information on adverse drug effects, currently the fourth-leading cause of death in the U.S.

An example of this issue is Ambien, an insomnia drug that previously had the same dosage prescribed for both men and women. When evidence appeared that women were having a significantly greater rate of adverse reactions the following morning, the FDA reduced the recommended dosage by half in 2013.

“Rather than take the stance that we wait for evidence to become so overwhelming that we have to do something about, we wanted to be more proactive,” said Nicholas Tatonetti, PhD, a Columbia University researcher who co-led a study in Patterns that uses machine learning to identify these adverse effects in women. “We want to use databases like the Adverse Event Reporting System (FAERS) from the FDA or the electronic health records to get a jump on identifying sex-specific adverse events before it’s too late.”

Tatonetti, an associate professor in the Department of Biomedical Informatics, collaborated with Payal Chandak, an undergraduate student in Columbia’s Department of Computer Science, to develop AwareDX (Analysing Women At Risk for Experiencing Drug toxicity), an algorithm that leverages advances in machine learning to predict sex risks.

“We developed a machine-learning framework to data-mine for sex-specific adverse events,” Tatonetti said. “We went through hundreds of thousands of hypotheses and evaluated them. Payal designed a system that addresses confounding biases because it’s very difficult to study these effects, because some drugs or effects are more common in either women or men. We invented a technique that mitigates the confounding biases, develops a statistical basis to identify sex difference in adverse effects, and rank them by the strength of that evidence.” 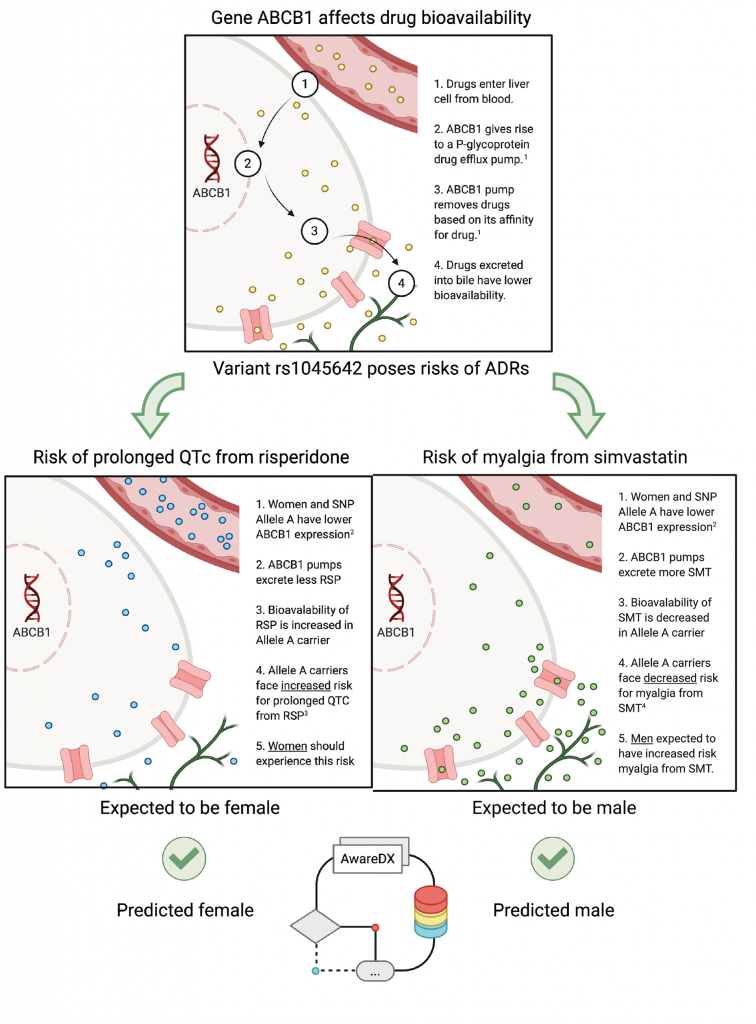 An example of findings from this algorithm (see graphic, right), believed to be the first validated approach for predicting sex risks, is the confirmation that a single gene (ABCB1) can pose different risks for men (from simvastatin) and women (from risperidone). Overall, this resource includes 20,817 adverse drug effects posing sex-specific risks, and it presents an opportunity to minimize adverse events by tailoring drug prescription and dosage to sex.

“We were motivated by the lack of information across different communities on the efficacy and safety of drug effects,” Tatonetti said. “We addressed that issue in this study specifically for women, who hold greater risk for these adverse effects than men due to differences in pharmacokinetics and pharmacodynamics. This specific knowledge can impact guidelines about drug prescription and dosage and creating safer, healthier conditions for women.”